Mr. Trợ Đổ was born on October 1, 1934, in Quang Ngai, Central Vietnam. In 1957, Mr. Do entered the Universite De Saigon as a medical student and graduated with a bachelor’s degree in high school education. Mr. Do taught at a high school in Nha Trang after graduating, then served as an army medic in the Army of the Republic of South Vietnam. While in the Army, he earned a physician assistant certificate from the Military Medical School. In 1974, he retired at rank Lieutenant and began teaching at Thu Duc University. In April 1975, Mr. Do was taken by the communist to re-education prison camp and was released in 1979. In February 1980, he escaped Vietnam, with two children, as boat people and arrived in Thailand. With his released paper from the re-education camp, he was recognized by U.S. officials and given priority.

In September 1980, he was sponsored by a Lutheran Church to settle in Hampton, VA. In 1984, his wife and two younger children escaped Vietnam as boat people and joined the rest of the family in the U.S. From 1986-1991, Mr. Do worked as a nursing assistant. While working, he studied and obtained certification as a skilled nurse assistant. Between 1992-2002, he worked as a librarian for the Fullerton California State University until he retired. While working and studying, Mr. Do graduated with an Associate’s degree in Library Technology from Rancho Santiago College in 1992, then a Bachelor’s degree in French studies from Fullerton Cal State University in 2000. 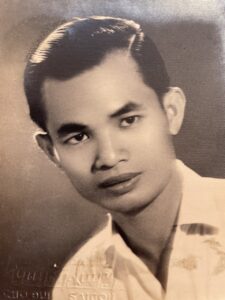 During his retirement, he worked part-time as a tutor in math. Mr. Do was baptized at Fountain Valley Baptist Church. He also believed in the Mother Mary, trusted Her with his life, and always remembered to buy some flowers for Her. During the last month of his life, he was baptized and anointed as a Catholic; his Saint Name is Matthew. On January 6, 2022, he passed away at his home in Garden Grove, California. 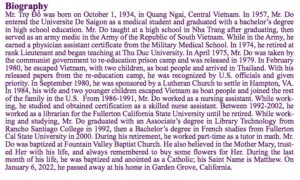