“If you ever wanted to visit Virginia, the time to do it is in 2019. This will be a spectacular year for the Commonwealth with attractions and events for everyone. American Evolution has worked with Virginia’s most notable institutions, destinations, national partners, and leading corporations to amplify all that Virginia has to offer,” said Kathy Spangler, Executive Director, 2019 Commemoration, American Evolution. “We have planned 365 days of programming to build awareness of Virginia’s role in the creation of the United States and reinforce why Virginia is a top destination for history and heritage tourism.”

The Top Eight Reasons to Visit Virginia in 2019:

2. Virginia History Trails represents the 400-year arc of Virginia history and offers 20 themed trails each exploring an important part of Virginia and American History. The app’s “near me” function helps visitors discover important history right where they are.

3. 365 Days of Special Exhibitions and Signature Events – American Evolution, in partnership with leading Virginia institutions, has developed a world-class series of special exhibitions for the commemorative year. Visitors can learn more about Virginia’s role in the creation of the United States and explore the enduring issues that have shaped our country.

5. 400 years of African American History – On August 23-25, 2019 we will commemorate the arrival of the first Africans in English North America. In partnership with the City of Hampton, Fort Monroe and the National Park Service, we will dedicate a new Visitor and Education Center.

6. Women Who Changed Virginia And America – In 1619 English women were recruited in significant numbers to the Virginia Colony. We will reflect upon the contributions of the three original cultures, Virginia Indian, English, and African, from a women’s perspective. The recently-opened exhibition, TENACITY: Women of Jamestown and Early Virginia at Jamestown Settlement, is one of many ways we are creating a lasting legacy for women’s role in Virginia and the American Evolution.

8. Come Home to Virginia for The Statewide Customs, Cultures and Cuisine Festival – The November 2019 American Evolution finale will be a month-long celebration across the Commonwealth that promotes Virginia’s customs, cultures and cuisines – region by region/community by community.

During the 2019 commemorative year, American Evolution will host a series of more than 20 exhibitions, featured events, educational initiatives, and statewide campaigns that build awareness of Virginia’s role in the creation of the United States. American Evolution programming inspires local, national and international engagement in the campaign themes of democracy, diversity and opportunity, and reinforces Virginia’s leadership in education, tourism, and economic development.

2019 marks the 400th anniversary of pivotal 1619 Virginia events that forever changed the trajectory of Virginia and America’s history. These 1619 events include the First Representative Legislative Assembly in the New World, the arrival of the first recorded Africans to English North America, the recruitment of English women in significant numbers to the Virginia colony, the first official English Thanksgiving in North America and the launch of free enterprise in the Commonwealth. For more information about American Evolution’s upcoming events, programs and educational initiatives, visit AmericanEvolution2019.com. 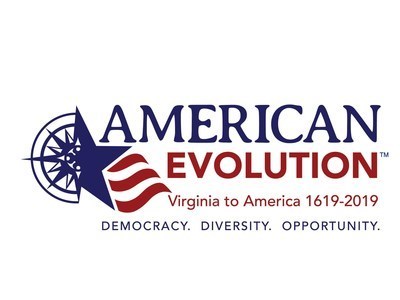